skip to main | skip to sidebar

It had been almost two months since I went for a trek (kanoor fort). Damn that Subbu! I was itching to go somewhere for a nice monsoon trek when Tarsh comes up with a trek plan to Nadumale (finally he puts his NOLS training to some good use!!). Without a second thought I jumped in. The team: Subbu, Sirish (yes!), Flavia, Tarsh, Astha, Anand, Shalini, Siddharth, Suresh, Shashi and yours truly!
Before boarding the TT to Bhagamandala (the starting point), we had a hog-athon at Brigade Road, where we hogged on delicious chicken momos (2 plates each) and then bought 2 full baskets of KFC chicken!! (Oh my, the quantity is too mach!) Not content, we even stopped at a dhaba on Mysore road for another round of dinner! :O Bloody eating machines. Let's trek bitches!
Route: Bangalore - Mysore - Hunsur - Madikeri - Bhagamandala. 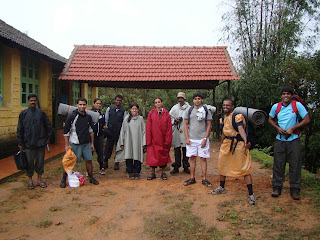 The starting point.
The trek started from a forest guest house near Bhagamandala and was of constant descent on a jeep track. Almost the entire stretch is a walk in thick forest cover. Only at a few places we were on open grasslands overlooking a valley. Since we had done the trek in monsoon, I can only describe the trek in 4 words: misty misty leechy leechy! 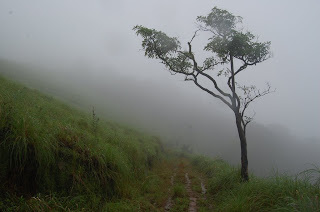 Misty misty!
The first day's halt was at Nadumale forest guest house, which is no longer inhabited. (Why would it be? To even talk to another person, you'll have to walk 12 kms). The guest house is located next to a stream and is a really nice camping spot, if you don't count the leeches! Since it was raining throughout, we didn't stop for lunch and came directly to the camping site at 5:00 pm. Taking a quick dip in the stream, (aah ice cold water, brrrrr!), we gorged on Maggi noodles. Everyone was too lazy for a full-fledged dinner (we were also quite full) and everyone hit the sack as early as 830 pm. Me and Subbu, though, had a discussion on world peace (no, seriously) till 11:00 pm :-). 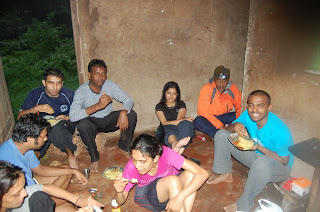 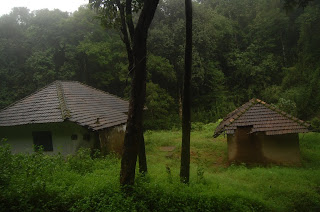 Our camping spot..
Next morning we started from the place at around 9:30 am. The route from Nadumale to the ending point, Peringom in Kerala, is on a flat jeep track and is about 12 kms. This was a pleasure walk. Once we reached the end point, where our TT was waiting for us, everyone got into another de-leeching mode, while me, Subbu, Sirish and Sid took it as another opportunity for wallowing in the stream close by.
The route back: Peringom - Karike - Bhagamandala - Madikeri (awesome dinner at Hotel East End) - Mysore - Bangalore.

Permission is needed to go to Nadumale. Call up Aranya Bhavan in Madikeri for permission and they'll arrange for a guide (required, the forest is a core elephant territory). Contact number: 08272-228019
Photos are here and here!

Thus continues the quest...
Posted by Nitin at 9:45 PM