skip to main | skip to sidebar

Warning: Newbie trekkers donot try this trek. Experienced trekkers donot go to this place without a map and a GPS and loads of water! And get ready to get lost! Brace yourself for one of the toughest treks in the south.

A few of us had planned to do this trek three weeks back wonly (the last weekend of Jan). But somehow, didn't happen. This weekend 'Mohmad' was around and I had decided to go to the place no matter how many ppl drop out. I knew Mohmad wouldn't ditch. So no way OmbattuguDDa was going to be cancelled, for any stupid reasons. So finally, it was eight of us. Mohmad, Jitha, Mahesha, Adithya, Madhu, Kantha, Vatsha and yours truly. Equipped with a GPS and a topo map, we set off from Bangalore in a qualis, with latest Kannada movie songs blaring from the stereo. Weren't me and Jitha excited!?? I have no clue how others managed to get sleep, but for me, it was a sleepless night as we reached Gundya at around 5 in the morning. Kantha and Vathsa, who seemed like eternal sleepers, finally woke up!
The starting place for the trek is about a km from the Gundya gate. Immediately after crossing a bridge, there is a mud road on the right side, from where you set off. After about 2.5 hours of brisk walk along a flat terrain, we reached a river intersection, which was our first destination. Well, we could see only one river, but the intersection wasn't very far away from us, according to the topo map. Finished our breakfast and many of us were tempted to get into the river. Adithya got adamant that we leave soon, but managed to 'accidentally' fall into the river! Nice trick. We continued straight on a well defined path, along the Kabbinale river for another two hours, when finally, the urge to get into the water got to us and all of us took the plunge. I suggested we have lunch there itself, but others refused and were to find out what happens when they dont listen to yours truly... 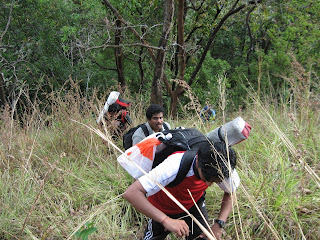 End of the picnic. Now begins the fun. There was absolutely no path from thereon. But looking at the GPS and the topo, we headed straight in the direction of the peak (we probably should have taken a round-about route). Steep climb, loose mud, thorns all around and not a hint of a drop of water anywhere. Getting to the grasslands itself is tough but we managed to do it in good time thanks to the GPS and fit trekkers (all of us). Water reserves nearly got over and all of us were extremely thirsty by the time we hit open grasslands at around 4:30 and yeah, we could see the peak right in front of us. Another two hours of arduous climb and we reached the peak... Phew, first attempt, first day, considering the place is famous for people getting lost and all (haven't come across anyone who has completed the trek in one day). But all of us were too dehydrated to celebrate. Parched throats, dry tongues, burning lips, salts coming out of every pore in the body... Amidst all these, our dear committed man Mohmad managed to pee!!!! Jitha pointed out that he might have wrung his thing to get the pee out, but hey, he had that much water reserve nevertheless! We were all hungry too (remember we hadn't had lunch), but nobody was willing to eat because that would make all of us thirstier. 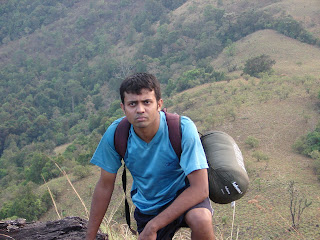 Our next task was to get to a jeep track which was less than a km away. But we had to cross a jungle to get there and it was already dark. We didn't find any path but got into the jungle intending to go in the north-west direction. But it ain't no easy finding your way in the jungle in the dark. Within a few minutes we got lost and the GPS stopped working in the forest cover. We kept walking for about 20 minutes until we got an eerie feeling that we were lost. Already dark, no path anywhere and all the directions looked the same! We had no clue which direction we were going in! So then, we tried getting out of the forest in any direction for the GPS to start working. We couldn't even retrace our path. We were left clueless in thick jungle and in the dark. Mea-culpa, since I was leading. But thankfully no one complained (nobody had the energy to talk!). After apparently going round in circles for more than an hour in what is supposedly a small strip of thick forest, we decided to rest for some time, think and start again. It was here that ppl started getting ideas of camping where we were (definitely not happening, i thought, we didn't have water, damn it!). Most of us considered spending the night in the forest itself. We started wondering whether the trek was really worth it. But then there's something called necessity and hope which can drive a person to his absolute limits. We started noticing the direction in which the moon was moving. Although others weren't aware of the fact that the moon moves from the east to the west, me and Adithya knew for sure. Then eventually, gathering all the energy and determination we had, we headed in the north-west direction and managed to come out of the forest. As if getting lost once wasn't enough, we had to cross another strip of forest to get to the jeep track! But luckily, after me and Mohmad scouted around a little, we found a clear trail and after another half an hour of walk, we hit the jeep track.
We were relieved beyond any forms of expression. We could now easily get to the estate where we could get those two molecules of hydrogen and a molecule of oxygen, which people lovingly call 'water'. Water... Aaahh.. that colourless, odourless and tasteless liquid to which you have an easy access when at work or at home... that which quenches your thirst... that which was the only thing in our mind then... But we were to suffer for some more time. The jeep track was frustratingly long and winding and ascending. After every corner, I would flash my torch to see any traces of water on the roadside. The jeep track was where the exhaustion and frustration really got to us. Till then, (even in the forest when we were lost), I could see the funny side of everything. But the never ending jeep track got to me. Never before was I so exhausted. Dragging my legs for what seemed to be an eternity, we finally reached the estate at 11pm. We all broke down with emotions when we saw a hose pipe with water trickling at the end of it... Well, we didn't actually cry (we are all men u see), but the mood was something similar. The estate workers provided us a room where we crashed for the night.

The next day, abandoning plans of dipadakallu trek, we put a touristy trip to Mulliangiri, going all the way up in our qualis! Every water source, a lake or a small falls or even a simple tap, would remind us of the previous day's experience and would make us happy and bring an ironic smile on our faces. After a customary "tandoori chicken" (you need to bring your two hands, fists clenched, closer to your face and crouch a little when saying this) lunch at some dhaba near Hassan, we headed back to Bangalore.
Ombattu guDDa has to be the toughest trek i've been to (i've done quite some trekking in the past and consider myself reasonably fit). OmbattuguDDa is an endurance test. Think twice before heading off to the place. Going there without a GPS would be pure madness. The dryness of the place apart, it's very easy to get lost there and the place is supposedly infested with elephants, though we were lucky not to find any. Iam not even imagining being chased by elephants when all of us are parched dry.
The aftermath: I am now looking at water in a different light altogether. Everytime I drink water and I see water, I remember that evening. Everytime there's a slight hint of me getting thirsty, I run to the nearest water source...

Thus continues the quest...
Posted by Nitin at 2:46 PM

>>two molecules of hydrogen and a molecule of oxygen..

Its two molecules of hydrogen and a molecule of water!!

Good one!!
I'll make sure I'll come along for the next trek!

@jitha: even while writing this post, i had done the same mishtake initially :-). But soon realized it.

hehe..well ritten man..now dont u get angry, when u see someone else wasting water...? :-)
everyone should go on treks..!!
save water..!

@shilps: i dint have to go to ombattugudda just to get angry at someone! even otherwise i would get angry.. anyways, when i look back now, ombattugudda was fun and will be going back there again :).

Hi.. was a lovely read.. thanx for sharing your experiences. Some of us have determined to trek to Ombattugudda after we failed last month.Can you pls help us with the topomap Numbers and the GPS co-ordinates pls and yeah some tips would help us a lot. Thanx.